Cassava is one of the most consumed food in the world.
Cassava is a woody perennial and branched shrub that can grow up to  5 metres in height. It has large, spirally arranged, lobed leaves of very variable forms.
During growth, the shrubs produce several tuberous roots as reserves made of up to 35% starch which may reach up to 1 m in length and together may weigh up to 40 kg. 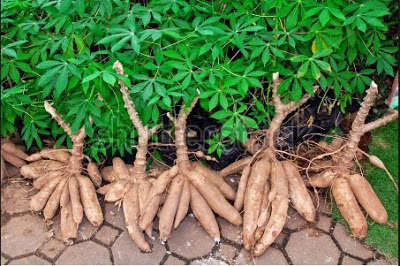 Cassava produces small, regular female and male flowers in small clusters. The shrub produces a form of non-fleshy fruit capsule.
Cassava grows better in all regions near the equator, at elevations below 1,500 m, rainfall between 1,000 to 1,500 mm/year and a temperature of between 23 and 25oC. With the exception of heavy or saturated soils, it can grow in all soil types; it prefers light, well-drained, deep soils that are rich in organic matter.

It favours sunny locations and grows in high temperatures in tropical and subtropical regions. It tolerates long dry seasons (6 to 7 months) as well as reduced precipitation.

Cassava may be planted alone or in combination with other crops such as maize, plantain, vegetables or legumes.

‘The cultivation of cassava does not require much labour, typically 75 to 125 man-days per hectare, from the preparation of the land to harvesting. Sweet cassava tubers may be harvested 8 to 10 months after planting, whereas for the bitter varieties, the harvest starts from the 12th month.

Cassava is very valuable and contains numerous by-products, some are consumed while some are used as raw material for a particular finished goods. The following are the by-products that can be gotten. From cassava plant;
1. KISANVU
This is a meal made from cassava leaves, it is common in Tanzania. To make the leaves edible, previously chopped or ground leaves must be cooked to remove the large amount of cyanogens that it contains. This food is prepared by crushing the leaves with a mortal and pestle to produce a produce a very fine pulp. Boil water, add the salt and the crushed leaves. Stir continuously until the leaves are cooked. Put aside. Fry onions and add coconut milk or peanut butter. When the mixture starts to boil, add the cooked cassava leaves. Stir for a few more minutes and remove from the heat. Serve with rice or another main cereal-based dish.
2. KWEM
This Is another meal made from cassava leaves, it is a native of Cameroun. It is prepared by cooking together, palm but pulp and mashed cassava leaves with peeled and cleaned cassava tuber. These are cooked on high heat and stirred intermittently. After 20 minutes, check the  cooking process and adjust the amount of water. For a quarter of an hour, half cover the pot to allow the water to evaporate. This vegetable soup is ready once the crushed leaves turn a yellowish colour and the liquid has reduced by half.
3. CASSAVA PASTE 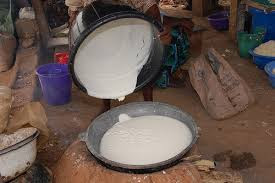 Cassava paste is another by product made from fresh cassava roots or tubers and water.
This can be made in two ways, either fermented or unfermented.
To make it using the fermented method, the cassava tubers are peeled and washed after which they are soaked for 3 days to soften them. Once fermented, clean them by removing the central section, then take out the cassava. The resulting paste is pressed and crushed to make the fermented cassava paste used in the production of cassava sticks.

Unfermented cassava paste is used in the production of several products such as: pastries, couscous, semolina, starch, etc. The cassava roots are peeled and Washed in clean water. Then grated. Grating is either done manually by rubbing the cassava against a grater or mechanically through a mill. 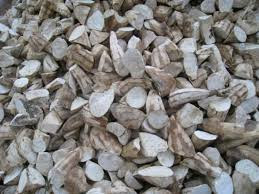 This is made from fresh cassava tubers. The tubers are peeled,  washed and cut into pieces. They are then soaked for 3 to 6 days, depending on the season. This takes less time in the dry season. Then the fibres are removed and the chips are dried in the sun before they are stored in clean bags. 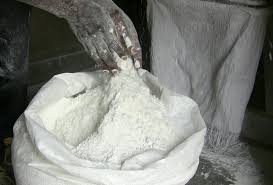 Cassava flour production is made either from dried chips or from unfermented cassava paste. In both cases, the product is dried, ground finely and sifted before being packaged.
From dried chips
• Grind or crush the chips to produce the flour.
• Sift the flour and put it in suitable packaging (i.e. cup, bag, packet).

From cassava paste
The cloth  must be put on a raised support and not directly on the ground.
• Press the paste obtained after grating the peeled and carefully cleaned roots.
• Dry in the sun on a clean cloth, positioned on a gentle incline.
• Dry the paste until it is floury. Then grind the dried paste in a mortar or in a mill to produce the flour.
• Sift the flour and transfer it to suitable packaging (i.e. cup, bag, packet).

Cassava starch is produced from unfermented cassava paste, the processes involve
• Mix the cassava paste in a vat of water, at a ratio of 5 litres of water to 1 kg of paste.
• Sift the mixture and collect the starch milk in a basin. Allow the starch to settle for 1 hour.
• Collect the paste that has been deposited at the bottom and leave it to dry in the sun. This extracts the starch.
• Grind the starch and sift the powder, then package it into bags.

7. PRODUCTION OF FERMENTED AND BAKED SEMOLINA

The fermented and baked meal, is made from the fermentation of peeled and crushed cassava. Fermentation is carried out by enzymes known as magnan. The semolina is obtained after spinning the paste. It is dried, sifted, sized and steamed to give a sticky and slightly tangy product . 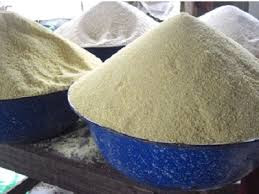 Garri is one of the popular foods in Africa, especially Nigeria, Garri is a dry meal that can be kept for a very long time. It is quite technical and herculean to prepare. The preparation for Garri goes thus;
• Prepare the cassava paste, pack into bags and leave it to ferment for 2 to 3 days.
• Press the paste using blocks of stone or a press, until the water stops dripping. Note that the surface of the bag should remain moist.
• Drain the dry paste using a sieve while removing some of the fibres
.• Grill or roast the semolina in a pan or on a hot plate.
• After roasting, sieve the gari to remove the large pieces that remain and size using a bamboo sieve with different mesh sizes, which will give different qualities of gari.
• Keep them in a clean container (bag or packet) for trading. 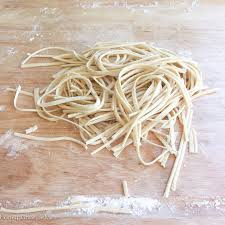 This is made with cassava flour and egg. This product can be prepared using the following processes;
• Pour the flour onto the work surface. Make a well in the middle, add the eggs and mix using a fork.
• Once the flour is completely mixed with the eggs, work the pasta by hand for 15 minutes until it is compact, smooth and elastic.
• Form it into a ball and leave it to rest for 1 hour at room temperature. Add water if it is dry or f lour if it is too sticky.
• Then, divide the ball into three equal sized pieces. Roll each piece of pasta through the rollers at the maximum thickness setting, then a second time on the tightest setting. Roll it through five or six times until a fine band of pasta is produced. If necessary, pour flour on the  pasta to stop it sticking. Fold it in half before rolling it through the machine again.
• Use the pasta dryer or rest the pasta on a cloth for at least 10 minutes, then put it into bags. 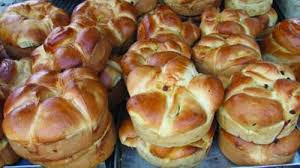 As we have other farm produce bread, like wheat, so also exists cassava bread. This is baked using cassava flour, it has been researched to be more nutritious than other type of breads.

Feel free to add yours below and let’s make people aware of the importance of cassava to humanity by SHARING this post.

How to Start Cassava Farming

Feeds and Feeding in Snail Farming