UPDATE
President Muhammadu Buhari on Monday formally resumed work in his office after 49 days of medical sojourn in London, United Kingdom.
Vice-President Yemi Osinbajo, who held the fort in acting capacity, met with the President in his office for over an hour, ostensibly to bring him up to date with developments that took place while he was away. 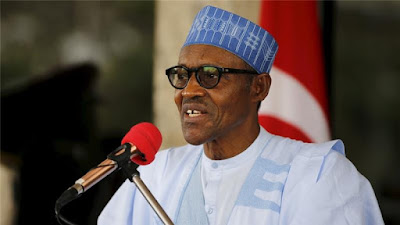 The meeting which started at about 12noon ended at about 1.30pm.
The President was Sported in a light blue ‘agbada’ and a cap, the first task He carried out as he resumed in his office on Monday was to append his signature to a letter he sent to the National Assembly, informing the lawmakers that he had resumed work after his medical vacation.
He signed the letter in the presence of a few of his aides who arrived at the office with him from his official residence.
Shortly after signing, the President’s Senior Special Assistant on National Assembly Matters (Senate), Ita Enang, arrived at the Presidential Villa to pick the letters.
Enang moved straight to the President’s office on arrival.
The Special Adviser to the President on Media and Publicity, Mr. Femi Adesina, later issued a statement announcing the transmission of the letter.
While returning from Buhari’s office, Osinbajo told State House correspondents that he had handed over to the President and had reverted to his role as the Vice-President.
He said the President was ‘over-ready’ for the job ahead of him.
Adesina said the Presidential communication to the National Assembly was in compliance with Section 145 of the 1999 Constitution (as amended).
The letters were addressed to the Senate and the House of Representatives.
Henry
0 0 1 minute read
Facebook Twitter LinkedIn Tumblr Pinterest Reddit VKontakte Share via Email Print