John D. Rockefeller is recorded to be the wealthiest American of all time and the richest person on the modern history, who happens to be the second of the six children and the eldest son in Rich fold; he was born to the family of an English and German descent while his mother was of Scots-Irish descent.

John D. Rockefeller started his business work at the age of 16years when he was an assistant bookkeeper; he also went into business partnership with Maurice B. Clark and his brothers at the age of 20years.

After buying them out, he and his brother founded Rockefeller and Andrews with Samuel Andrews the foundation focus on refining of oil. In 1867, Henry Flagler entered the partnership. 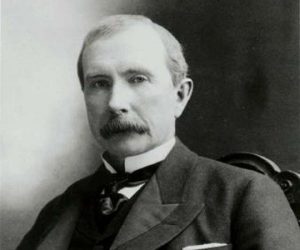 The Rockefeller, Andrews & Flagler company grew by incorporating local refineries. Rockefeller formally founded the Standard Oil Company, Inc. in 1870 as an Ohio partnership with his brother, Henry Flagler, Jabez A. Bostwick, Samuel Andrews and a silent partner, Stephen V. Harkness. He ran it until 1897. As kerosene and gasoline grew in importance, Rockefeller’s wealth soared and he became the richest person in the country, controlling 90% of all oil in the United States at his peak. Oil was used throughout the country as a light source until the introduction of electricity and as a fuel after the invention of the automobile.

John D. Rockefeller is a man worth reading from, the secret of any man lies in their stories, if you want know about greatness you read about great men, if you want to be rich you read about the rich people, even to understand wealth creation you read about men who has touched wealth and handle wealth, talking about being wealthy John D. Rockefeller is a man that is worth reading from, no man in modern history is in any means reason richer than this man, and there are only few that can raise a business empire that is as big and powerful as STANDARD OIL.
Knowing how powerful this empire was, it was able control 90% of the whole United State oil and Standard oil was also able to crash the price of kerosene in the whole world by 80%, this is really an empire that stood mightily in control of oil.

The Standard Oil was an empire that owned 20,000 oil wells in America alone; also have 4,000 miles of oil pipeline, 5,000 tank cars, and a very large workforce of over 100,000 employed workers. John D. Rockefeller was a man who dreamed his company being in the control of the John D. Rockefeller world entire oil, but was only able to attain 90% of the entire world oil not because of inability do it but as a result of sentiment, he said in one of his statement that “We realized that public sentiment would be against us if we actually refined all the oil.”
When the US government finally broke up his company based on anti-trust grounds and public sentiments, it divided into 34 separate entities, some of which are: Chevron, Exxon, Mobil, Conoco, Amoco now part of BP, etc.
These individual oil companies today are giants on their own, actually all these are not our focus on this article our major focus is to check through some of the things this man apply that made him fly in his days;

In the bit of closing this article I will like to close with one of the popular quote of this great man John D. Rockefeller says and I quote “From the beginning, I was trained to work, to save, and to give.” And I will like to bring to our notice that this great man was a die-hard giving and giving is one of the greatest principles these great men understand that made them to live even beyond their contemporaries then and made their name to always ring in the heart of men even till today.