Mark Zuckerberg: Mark Zuckerberg is one of the youngest self-made billionaires in the world.
The Facebook founder signed the Giving Pledge.
He promised to share at least half of his wealth in his lifetime. He has already donated $1.6 billion.
Last year, Zuckerberg and his wife Priscilla disbursed $25 million to help fight Ebola. 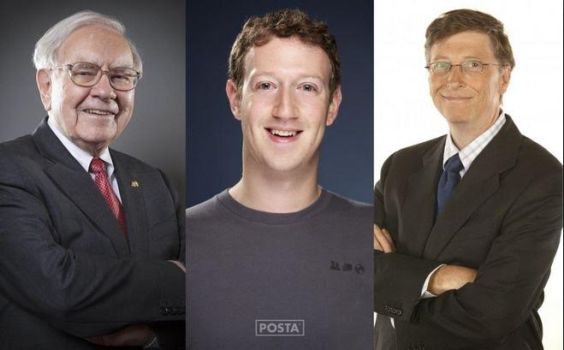 Micheal Bloomberg
Michael Bloomberg is the founder and CEO of Bloomberg Media, the former Mayor of New York City and the founder of the Bloomberg Foundation. His foundation provided donations to the John Hopkins University, the World Lung Foundation, the World Health Organization, the Sierra Club Foundation, and the John Hopkins Bloomberg School of Public Health. He’s donated in total $3 billion to charities.
Carlos Slim
Carlos Slim is one of the richest self-made billionaires in the world. He is one of the three richest men in the world. Through the different foundations he is involved in, he has donated $4 billion to charities so far.
Gordon Moore
Gordon Moore is the co-founder of Intel. He retired from his corporate positions in 2006 and is nowadays very involved in philanthropy with his wife. Together, they run the Gordon and Betty Moore Foundation and have already donated $5 billion to campaigns supporting environmental conservation, patient care, and science.

Sulaiman bin Abdul Aziz Al Rajhi co-founded Al Rajhi Bank in 1957 with his three brothers. The bank has grown into one of largest Islamic banks in the world. The Al Rajhi family is considered to be among Saudi Arabia’s richest non-royal family. In 2011, Sulaiman bin Abdul Aziz Al Rajhi announced that he was donating most of his then $7.7 billion fortune to charity. So far, he has donated $5.7 billion.
Charles Francis
Charles Francis Feeney is often called the “James Bond of philanthropy.” He made his fortune as a co-founder of the Duty-Free Shoppers Group. Determined to give away his entire fortune, the philanthropist who has a current net worth of $1.5 million, has already donated $6.3 billion to charities. His foundations support education, science, healthcare, and civil rights across several countries, including the US, Vietnam, and Bermuda.
Azim Premji
Azim Premji is an Indian business tycoon, investor, and philanthropist. He is the chairman of Wipro Limited, an IT consulting company. He was the first Indian to sign the Giving Pledge. “I strongly believe that those of us, who are privileged to have wealth, should contribute significantly to try and create a better world for the millions who are far less privileged,” he once said. So far, he donated $8 billion of his wealth.
George Soros
The Hungarian-born investor, author, and philanthropist is the chairman of Soros Fund Management. He is nicknamed The Man Who Broke the Bank of England because he short sold $10 billion worth of British pounds and made a profit of $1 billion. It was during 1992’s Black Wednesday UK currency crisis. He has donated $8 billion to charities in the community development, social services, health, and education sectors.
Warren Buffet
The chairman and CEO Berkshire Hathaway, Warren Buffett is one of the very wealthy and generous people in the world. To date, he has donated $21.5 billion. In 2006, he pledged to donate 85% of his wealth to the Bill & Melinda Gates Foundation, and to other foundations set up by family members.
Bill Gates
Throughout his lifetime, Bill Gates has made $27 billion worth of donations. He spends most of his time managing philanthropic projects under the umbrella of the Bill & Melinda Gates Foundation. Gates co-founded Microsoft, which became the world’s largest software company.
Henry
0 0 2 minutes read
Facebook Twitter LinkedIn Tumblr Pinterest Reddit VKontakte Share via Email Print