BREEDS OF PIGS, SELECTION OF BREEDING STOCK AND PIG BREEDING

Pigs are one of the most domesticated animal in human history and there is a relative increase as the day goes by, human population is on the increase and thus bringing about a great demand for animal protein, Pigs are of different types and Breeds, their productivity, growth and over well performances are often times a result of the kind of breed they are, today, we will be looking at some of the Pig Breeds we have across the world.
Large White (Yorkshire) 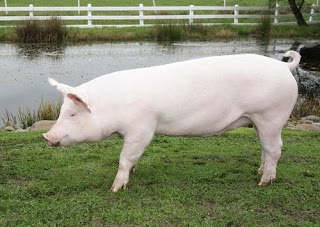 This breed is originated from Britain. Yorkshires  are the  most  recorded  breed  in  the  United  States  and  Canada.  They  are  white  with  erect  hears  and  of appreciable body length. The pig thrives well underconfinement conditions. It is best known for its large litter size and mothering ability. It is a docile tractable breed. Being one of the largest breeds, the gain are somewhat slower compared with other breeds. Thecarcasses are of excellent qualities.
Chester White 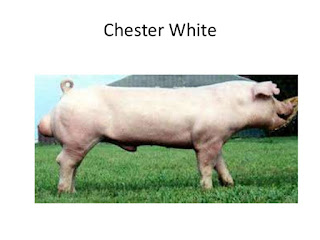 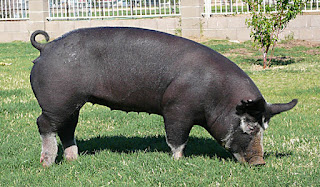 The  Berkshire  breed  has  long  been  known  for  its efficiency  in  gaining  weight.  The  meat  quality  of  the  Berkshire  is  unique  because  it  has  a  greater proportion  of  lean  meat  intermixed  with  streaks  of  fat.  This  intramuscular  fat  gives  more  marbling  in comparison to other breeds. Like all the swine breeds that end in ‘shire’, Berkshires have erect ears. In fact, the word ’shire’ means erect. The Berkshire breed standard requires a pig to have a color pattern consisting of only black and white hairs. The white points must appear on the nose, feet, and tail.
These white points can be missing and any additional white points may appear on the body of the
Hereford 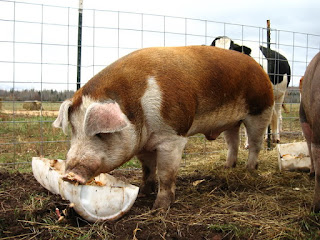 The Hereford breed originated in the 1900.s when aswine breeder crossed a Duroc, Chester White, and Poland.The Hereford breed was developed for its type, color, conformation, and superior feeding
qualities. The Hereford breed standard requires a white face, and no less than two thirds of the pig’s body to bered, exclusive of the face, ears, and at least two white feet. The white hair above the white feet must be extended at least one inch above the hoof. Hereford  hogs  are  known  for  having  a  long  neck,  moderate  jowl,  medium  sized  floppy  ears,  and  a medium length face.
Pietrain 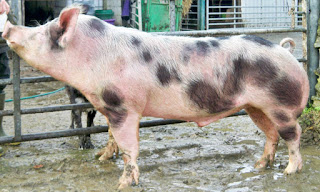 The Pietrain breed originated from Belgium in the  1950.s and was  later  exported  to  other  countries.  Pietrains  are  moderate  in  size,  have  black  spots  with  white pigmented hair around the black spots, and have moderately erect ears. Pietrains have shorter legs than most breeds, are low fronted, stockier in build, and are extremely heavy muscled. This breed’s popularity  has  been  up  and  down depending  on  market trends.  Pietrains  are  known  for  having extremely high lean to fat ratios, with percent lean calculations in the high sixty percent range. Pietrains possess doubled muscled or bulging ham shape. They  have poorer mothering ability and lower milk production than other breeds.
Spot 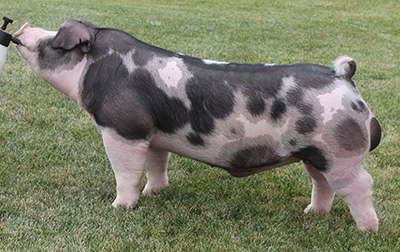 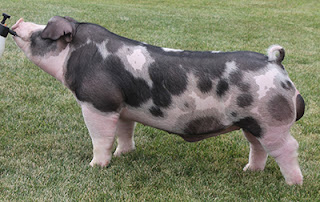 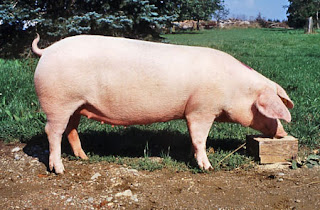 They are white and possess large floppy ears and longest body compared with any other breed. They have largelitter size and very good mothering ability. The flesh is excellent for making bacon.
Duroc 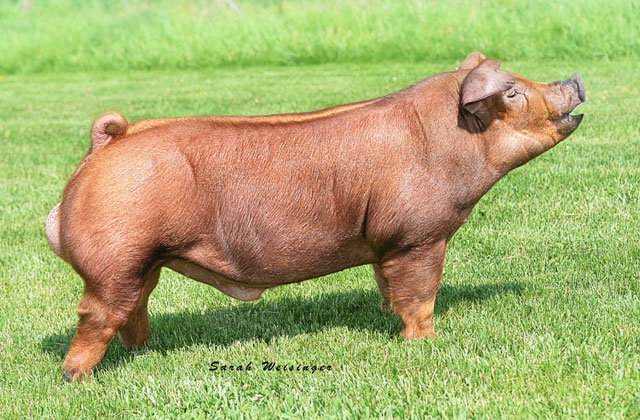 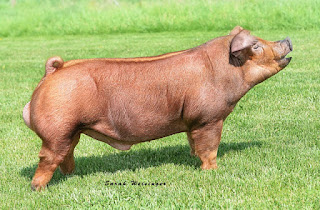 They  are  sound  and  vigorous,  very  fast  growing  andprofitable in production under varying production practices. The pigs are red and have short dropping ears and arched back. They are considered to be very good meat hogs.
Hampshire 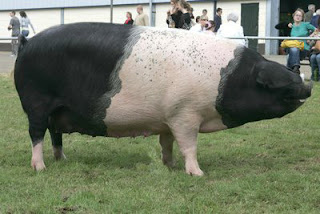 They are medium size, black pig with a distinct white belt around the shoulders including the forelegs. They have high prolificacy and high survival rate of the piglets.
Indigenous Breed 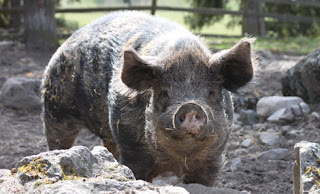 They are small in size with a long snout. The pig has back swept ears and a straight tails. The most common  colours are  brown  with  black patches, brown, black, and  black  with gray  or  white patches.They are characterized by stunted growth, poor reproductive performance of average of about three piglets. They are very hardy and have sharp feet.
Large Black 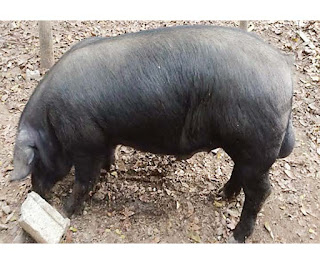 The large black breed is a British breed. The pig has long well proportional with a good reputation for ham and bacon production. It is a long, black pigs with lop ears and  is  considered  a  good  grazer  and mothers.  Growth rate  tends  to  be  slow  and  carcasses  are relatively fat.
Tamworth 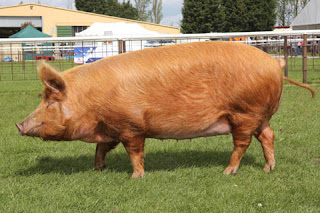 Tamworth  hogs  originated  in  England  and  are known for being a bacon type hog. Tamworths are thrifty, rugged, and deep sided hogs with a long neck, long legs, and a long nose. Tamworth females
make good mothers in spite of the fact that they lack  body  depth.  Tamworth  hogs  typically  walk  and  stand  with  an  arch  in  their  back  and  they  have medium sized erect ears. This breed should be golden red to dark red in colour, with straight hair.

The selection of the correct health status appropriate to your herd and location is vital before a breeding stock  is  purchased.  The  primary  reason  for  purchase is  to  genetically  upgrade  your  herd.  Major requirements will be that they are available when you want them, in the numbers that are needed and at a price you can afford. But an overriding requirement is that they will not cause disease in your herd and lower your overall health status. At the onset  therefore, consult with your veterinarian and ask him to determine at a veterinary level the information available about the proposed herd. The  investigations should  include  the  disease  history  since  its  inception  and  those  of  any  daughter herds that have been established from it. Also the  health status and disease history of other herds it supplies. All veterinary reports should be requested and examined together with the results of tests for specific diseases and the frequency of such tests. The breeding history on the farm should be checked together with any evidence of infectious reproductive disease. A detailed study of records of production parameters, growth and food conversion rates may behelpful. The biosecurity of the breeding pyramid should be checked along with details of the health  programme. The bio-security of the herd itself mustbe assessed including the methods by which pigs or genetic materials are brought into the herd. Finally a  written  veterinary  statement  should  be  obtained  indicating  that  on  both  clinical  and  pathological grounds those selected diseases that you wish to keep out of your herd have not been diagnosed in the donor herd.

One of the most important aspects of pig productionis getting young piglets off to a good start. For  this reason it is essential that the management and stockmanship of a farm is maintained at the highest possible standards. The pictures below illustrate some of the critical operations required to achieve this. The young piglets shortly after birth need to be kept at a temperature close to 30 degrees centigrade and are kept warm under an infra red lamp. Bedding  also helps to keep them warm and create their own microenvironment. Notice how the piglets huddletogether, this is a natural form of behaviour.
Feeding time
The crate that the mother pig (sow) lives in for the first few weeks of the piglets’ life prevents the sow rollingover and crushing the young piglets to death. For the first two or three days piglets are vulnerable as they weigh just over a kilo compared with the sow after the first two days of life, piglets have their own teatlet that they suckle from. A good sow will have 14  functional  teats.  Milk  yield  tends  to  be  higher  at  the  front  of  the  udder  compared  with  the back. Piglets are normally weaned at around 4 weeks of age which is an optimum time for both the welfare of the sow and the piglets.  After  weaning  the  sow  dries  off.  Sows  normally  come  on heat (exhibit oestrous) within a week. They are then mated either naturally with a boar or with artificial insemination (AI) or with a combination of both. At  feeding  time  sows  can  either  collect  feed  automatically from  a  feeder  or  they  can  be  fed  on  an individual basis as in the picture. The individual  feeder allows the sow to eat without interference and stress from her pen mates and provides the farmer with a good opportunity to check her health. The farmer may also check whether the sows are pregnant using the ultrasonic microphone as illustrated.

Five Easy Steps on How to Correctly and Properly Breed

Why  are  pigs  one  of  the  most  ideal  animals  to  breed?  Why  do  farmers  include  pigs  in  their  list  of animals to breed for money and business? This is because breeding pigs doesn’t take up to much time and  pigs  are  capable  of  producing  large  litters.  They would only require a few boars or male pigs to matewith many sows or female pigs. If you’re interested in breeding pigs for business and would like to care for pigs correctly and properly breed pigs:
1.  Remember  that  you don’t  have  to buy  too  many boars  to  breed.  You  can  just ideally a year in age, and have him breed with about 30 to 50 sows that are either housed in stalls orina large pasture.
2. Always begin your breeding business with research. You need to know who to go to in order to buy the best boars for breeding plus the best and most fertile sows that can produce large litters that are not only healthy but that have the best qualities. You can either browse through the yellow pages for names of  pig  breeders  or  visit  and  get  referrals  from  well-known  stores  that  sell  pigs  and  pig  feeds.
3. When breeding pigs, select sows that are at least 9 to 10 months old as this is the ideal age for breeding. For the boars, you can either buy them when they’re at least 8 months old if you have a small number of sows then breed them with a larger numberas they grow older. Again, the older the boars are, the larger the number they can mate with.
4.  Sows  need  to  undergo  physical  check-ups  to  make  sure  that  they  have  no  infections  or  health problems that could produce problematic litters. You should also perform these check-ups to see if the sows are ready to mate. For instance, to check if the sow is ready, look at the vulva and see if it is swelling as this indicates the start of its fertility period. Young sows can be bred on their first day of fertility while older ones can begin on the next day after checking.
5. In breeding pigs, gestation lasts for about 113 days, so breed the  pigs during their fertility periods until pregnancy has been successfully achieved.
Henry
0 1 14 minutes read
Facebook Twitter LinkedIn Tumblr Pinterest Reddit VKontakte Share via Email Print

How to take care of Pigs (Step by Step Guide)

History of Pig Farming in Nigeria