Okay, guys i have wanted to write about this long time ago, eventually am here to talk about it.

December as not been  a very good month for both mmm nigerian members and mmm United participants and this is solely because for instance, people like myself had  a huge expectation for our money and our mavros which suppose to be paid in December but it was not, this was a great challenge on our side. 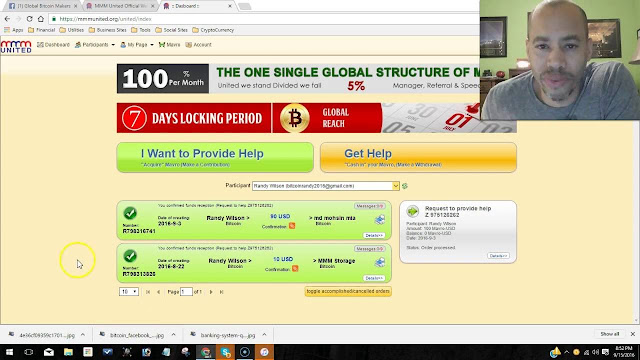 With so many plans, expectation and financial budget for the yuletide season, it was all disappointed and we had to just keep our fingers crossed and look like we have done the worst mistake ever in our finance and investment activities.

Its also a ridiculous thing to see how much mmm united cares less and show no form of concern for their articipant, their official fb page has no relevant update to help, their news link on the website also has no information as to what is really going on and investors are now left to just hold on, think there will be a way out sooner or later.

Its really sadden, but we must not give up, not because we so much love them, but because our funds are held down in the system and our hope is still alive in them.


MMM UNITED Ideology is a great one and i have also shared with my readers on this blog, how that i have earned a whooping of $1290 from the system by just participating with my $600 for the time, so that actually boosted my hope and confidence and i pulled in more, which i am suppose to get paid in december 30th, mavros stopped growing in 26th of december, some of my friends and downlines also stopped seeing improvement in the activity of the website, like those who GH/PH as not been matched, some were unable to login, some were not able to enter captcha because nothing is  showing up!

I am glad i have not build a massive community as a guider or downlines, this would have hit my reputation too hard and make me such a bad person to folks and i know many so guiders to in the community has no clue as regard what exactly is going on around, but i still believe all is gonna be well in a short time, and there as been rumor around that the yuletide season perhaps alters certain things in the system, because it seems as if people are just gonna GH and GH and GH all through December so that their Christmas and new year celebration can be a bouncing one, this is a good assumption, but i believe it will not really affect the system because as long as more people ‘GH’ there is bound to be more ‘PH’ this is how the system as been working and this is how it will continue to work and survive.

The information on the site and their Facebook page exactly 3-months after the launch obviously state and made it clear that MMM United as come to stay and the ideology is to make the system stay forever up and healthy!

But no matter their visions and will and aspiration, it is yet still very wrong for them to have a zero customer support service, there is no communication between the system admin and the participants and when you even send a mail, they will not respond, now there as been assumptions that, a lot of mails are been sent and that is the reason for the no reply (which is a bad reason) also, we observe that the server as been having problem for a longtime now, things are not the way the should be, the login and email, sign up servers as really been weird, it is also obvious that Nigerians have dominated the system than any other nation of the world right now.

It is the 46th most visited site in Nigeria currently, it seems The system got a boom when Nigerians begin to turn up really strong on the platform, Nigeria has the largest population in Africa and its a good ground for business, investment and name just anything that will be n favor of the masses.

There as been a weird attack on MMM Nigeria and crash rumors have been circulating the whole place, medias have also been doing their own worse to ensure they successfully pollute the mind of people from participating in the scheme, but now, MMM Nigeria announced a frozen of mavros till January 14th, this was a root shock to so many Nigerians, and it seems as though the media is winning, MMM as not crashed, and it is not going to crash, but there as been a lot of noise around this and people are panicking so in view of these, since Nigerians seems to be the major participant also in MMM United, there as been a lot of mindset that might not really help the community on the longrun, but the truth is, this does not have any effect and should not be the point of decisions for the admin, if they say you guys are not doing well, proof them wrong, by starting up to do well too.

I personally believe in MMM United, a lot of people have not been able to login for some days now, and this as clearly been as a result of the upgrade in servers and back end activities going on, fortunately, they also moved their server from godaddy to Amazon this morning, and this sounds really like a very good news for all participant, that even though they are poor in the place of effective communication, they have not stop working from their end to ensure that things are going just fine with the website and the system.

As long as the website is fine, people will be able to monitor their activities really good.

I don’t have a reliable source for something that was sent to me this morning, but it sounds like a good news that ” Things should be fully back in place by 10th of January, as the upgrade of servers activities going on is about to be fully concluded, now this sounds like a very good news and i’d pray it should be a reality soon.

So many of us belief in the system, and eve though we are not greedy, on the strength of our believing, we have put so much into it.

We really don’t want to be let down.

There as been a guy from California Sans Francisco, who as been doing really great with his Youtube videos to make clarity, as regard Bitcoin cryto-currency, bitcoin investment, TBC, and some of other opportunities out there, his name is,  “BITCOIN RANDY“.

Watch one of his recent video;

Bitcoin is a Top Guider in MMM United and some even called him the number one guider, this is not so sure but trust me, Bitcoin Randy is doing a great job to keep us posted altogether as a network of MMM United participant, he also shares some creative leadership wisdom and financial management skills, wealth accusation and how to develop a right mentality towards money, wealth, cryto-currency-currency, internet marketing and work at home opportunities around us.

Bitcoin Randy is not part of the admins at MMM United, he is just doing a great job to keep the thousands of Participants around the world posted as to what is going on in the system always, i personally find all his videos very useful and helpful, they go a long way to keep my nerves and concern as regard the system called MMM United.

So in a nut shell, MMM United is not going anywhere, they are not a scam, and its not crashing, don’t let them circumcise you with false rumors, the problem is a server problem and there as been a server upgrade going on and we keep ourselves highly positive about the system, that it will be back, better and stronger!

The challenge from the administrative of the system is poor communication, which i believe will be addressed as soon as the site is back, so if your $7,000 or $10,000 is locked up there, fear not don’t go and commit suicide (mmm united is really not worth dying for)… your money is coming back, tell your downlines to put their mind at rest, the system is going to be back and better.

Note : It is important i make this clear for  the sake of the future time that is coming ahead that we should endeavor to invest only our spare money into system like this, no body prays for something to go bad or the worst should happen but, we should be careful on how we pull in so much money on such schemes like this so that we will not be highly disappoint if things goes wrong, it won’t be good to borrow money from people who so highly trust you and do MMM UNITED with it, it can be disastrous.

How to Increase your Blogging Profits

WHY DONATION HUB IS 100% SCAM AND WILL CRASH SOON